So you’ve found yourself a good man, congratulations! Now you’ve set a date, and your wedding is inching closer and closer and you’ve been stressing yourself out over invitations, cake tastings and DJ’s, but there’s probably one other thing in the back of your mind that’s also stressing you out: the bachelor party.

Now of course you probably trust your fiancé (otherwise why would you be marrying him?) but it’s perfectly natural to be a little wary of the bachelor party. Maybe you don’t trust his friends or maybe you’ve just always heard crazy stories of what the night turns out to be. Surely movies like The Hangover aren’t helping things any.

But before you go all bridezilla on the poor guy, here are a few bachelor party truths you need to know:

1.) It’s not like the movies. Sure, there may be some heavy drinking and an embarrassing story or two about one of his buddies (it’s often the groomsmen that get crazy, not the groom), but it’s not near the debauchery that Hollywood makes it out to be. It’s usually nothing more than an amazing guy’s night. My boyfriend was recently the best man, and he planned a day where they played a few rounds of golf in the morning, went to a baseball game, had a steak dinner and then ended the whole thing with a later night poker night. The groom still brags about how it was one of the best days ever.

2.) It’s all about bonding. The reason bachelor parties are often so secretive isn’t because awful things happen during them, it’s because the act of keeping a secret bonds everyone together. It’s not uncommon for a bachelor party to be incredibly low key with a pact that no one ever spills the beans about how low key it really was. 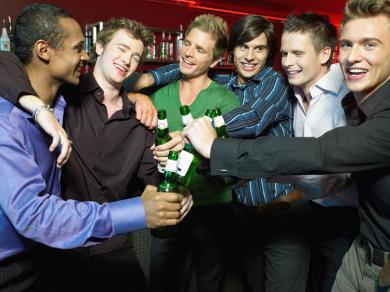 3.) He won’t be spending any money. A bachelor party is just like the bachelorette party; the guest of honor goes for free. So if it’s drinks, dinner, or a strip club (we’ll get to that later), he’s most likely not going to be the one shelling out the dough.

4.) It’s not really his choice. Bachelorette parties often take the bride-to-be’s opinion into consideration. She doesn’t want a stripper? Fine, no stripper. She would rather have a day of relaxing instead of a crazy night out? Spa package it is.

The groom, on the other hand, doesn’t really get much of a say. Usually it’s his buddies that plan out the night and it’s just his job to get through it. So if you say no strippers, and he says no strippers, but his buddies want strippers…there are going to be some strippers.

5.) He won’t do anything he won’t regret. He’s still your fiancé. A lot of liquor and some half-naked girls isn’t going to change anything. Plus, his friends are his friends for a reason; they aren’t going to push him to misbehave just for a good story. They know that he’s getting married and no one wants to start off their relationship on a bad note. So don’t badger him about every little detail when he comes home in the morning; he’s probably tired, dehydrated and really, really wants to see you. So let him know you missed him.